Getting real about income streams

The word retirement often invokes thoughts of stress-free days: holidays, gardening and perhaps visits from the grandkids. The reality, however, is often very different. Concerns over money, how long funds will last and what happens if they don’t fill the minds of many.Our current system may be the envy of others, but does that mean we should sit back and declare the job done? Or can we do better, much better?

What if Australia’s objective was to provide every citizen with an income stream that lasted for the rest of their life and it generally kept pace with inflation, to ensure their income does not decrease in real terms? There are many that hold the view that the income-stream products available on the Australian marketplace cannot efficiently fulfil this objective of paying an indexed lifetime income stream.

Australia’s current batch of products suffer from the extremely strong guarantees of investment and mortality. These costly guarantees are built into the price, making them unattractive. The result is that people simply do not buy them in significant numbers. The fact people cannot ‘see’ the money with an annuity, and that people will often forfeit any remaining balance at death, also weighs heavily on those considering a retirement product.

A new type of lifetime income stream is needed: one with different features and lesser guarantees, making the product more attractive and fairly priced so people will not be put off.

But what about account-based pensions? It is true account-based pensions are more attractive to Australians, as they can see the money and have comfort they won’t lose it upon death. However, it is also well known that there is yet to be an individual who has ‘taken it with them’, nor apparently is there any need to do so.

It’s also true there are no solvency reserves required, as there are no guarantees. The pension may even last for life, although the income normally reduces in real terms until the holder is receiving relatively low amounts of pension at older ages. It is then that the burden falls back to the rest of the community, as these retirees turn to the social security safety net. Some quick calculations on longevity and ageing demographics show the societal cost going forward. Evidence of this is noted in projections contained in the Australian Government’s Intergenerational Reports with some of the reading sure to cause subsequent nightmares.

Rather than discuss the merits of different options, let’s do what actuaries love to do and get to the numbers, challenge conventional thinking and provide some thought-provoking discussion. The graph below aims to show the pension achievable with an account-based pension compared to what might be achieved with the type of ’Real Lifetime’ Income Stream I propose – both shown in real terms, that is, after inflation. 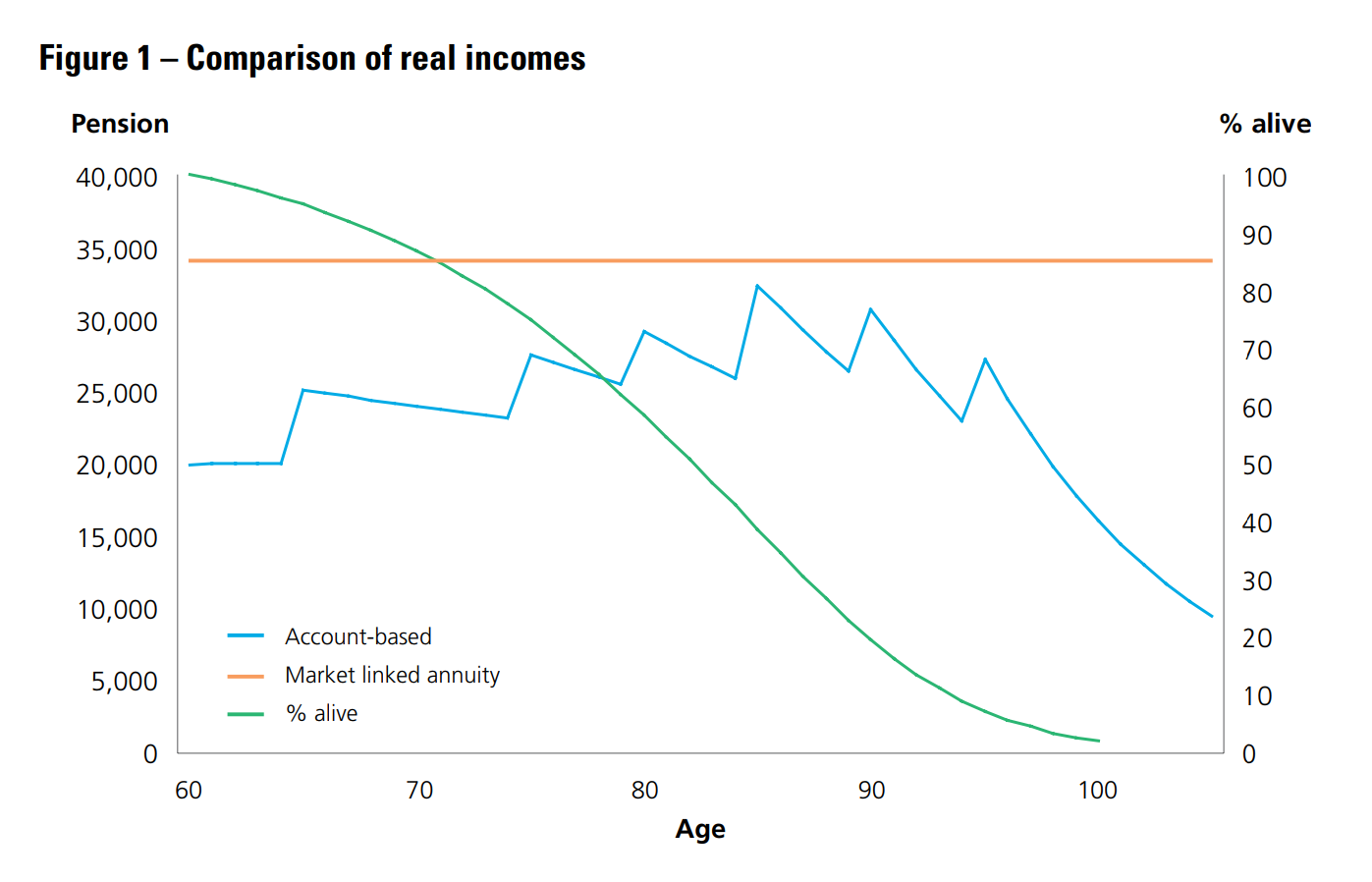 The green line shows the percentage of people still living at each age. The blue line represents the account-based pension, with earnings added and annual payments showing how available income trails off as the account begins to be exhausted.

When the pensioner and their spouse die, remaining assets are payable to their dependants or estate on a tax-concessional basis. I’d like to challenge that. Is this the reason tax concessions were given in the accumulation and pension stages of superannuation – so that children (or the cat) receive tax-subsidised benefits?

It could easily be argued that up to one-third of retirement benefits are payable to the children of the late member and their spouse. This is an ‘unintended consequence’ of our current system which, under the sole-purpose test, was designed to deliver a financed retirement, not an inheritance windfall. The community collectively provides concessions to deliver better retirement outcomes. Perhaps we need to ensure that is the purpose for which they are used.

The orange line represents a ‘Real Lifetime’ Income Stream. Under the pooled structure of a lifetime annuity, any remaining balance of those departed is effectively used to provide the future income of the remaining annuitants. That is why the orange line is always higher than the blue line.

How do we achieve the orange line? To do that, Australians need to be able to create annuities/pensions with the following characteristics

Sound easy? Let’s consider what we are up against. The challenge is to allocate retirement assets appropriately over your remaining lifetime. If you knew you were going to die in 20 years’ time, then the math isn’t too difficult. Make a few assumptions and spread your assets over the remaining years. The problem is we don’t know when we are going to die.

Die ‘too early’ and you may not have consumed all that is yours to consume, leaving your money to your kids and your cat. Live ‘too long’ and your lifestyle may gradually decline. We need to reduce retirement money worries and protect against these extreme life-event risks.

So how do we go about designing a ‘Real Lifetime’ Income Stream? It’s a hybrid really – similar to account-based pensions in that investment risk is borne by the annuitant, yet it still provides lifetime income due to the pooled nature of the product.

It is also worth noting that actuaries are now required to forecast mortality over the next 50 years. They will get it wrong. Why beat ourselves up trying to make such heroic forecasts when we could affect annual renewable reinsurance?

I have discussed with colleagues the concept of having mortality risk borne by a reinsurer whereby each year a reinsurer would offer stop-loss insurance to the provider of the ‘Real Lifetime’ Income Stream. For example, a super fund.

The premium would be a small percentage of assets, for example 0.3 per cent, based on that provider’s past mortality experience, which could be much less as people live longer and actual mortality rates could be a lot lower than today. Premiums would be set annually and accurately based on existing knowledge, not informed guesses made decades earlier by an actuary who has long since retired.

The benefit to the provider is the ability to make claims on the reinsurer in those years when not enough income stream recipients die, and thus financial losses are incurred. This is the opposite of group insurance but the concept is the same.

Where greater numbers of members die than expected, profit is reserved to offset future financial losses or used to increase income stream amounts, so overall members have a fair price for their benefits and insurance companies don’t lose money, which is in the interest of no one.

To achieve all this, we need to change Treasury’s benevolent thinking and remove barriers that suffocate this market, as recommended by Ken Henry’s recommendation 21 (c): “The government should remove the prescriptive rules in the Superannuation Industry (Supervision) Regulations 1994 relating to income streams that restrict product innovation.”

The benefits to the community are great, with issues outlined in the Intergenerational Reports partly resolved if Australia adopted a lifetime income-stream market. People will not fall back on social security at older ages when their account-based pensions decline, and a ‘Real Lifetime’ Income Stream market will help Australians become self-reliant in retirement and improve their standard of living.

We talk often about being an innovative nation, a nation that gets stuck in and gets the job done. The job of providing retirement incomes for all Australians is one we have taken great strides in over the last 25 years. However, it is time for an informed and caring Government and an innovative industry to roll up their sleeves and work together to continue to stride forward to deliver the next phase of retirement income policy.