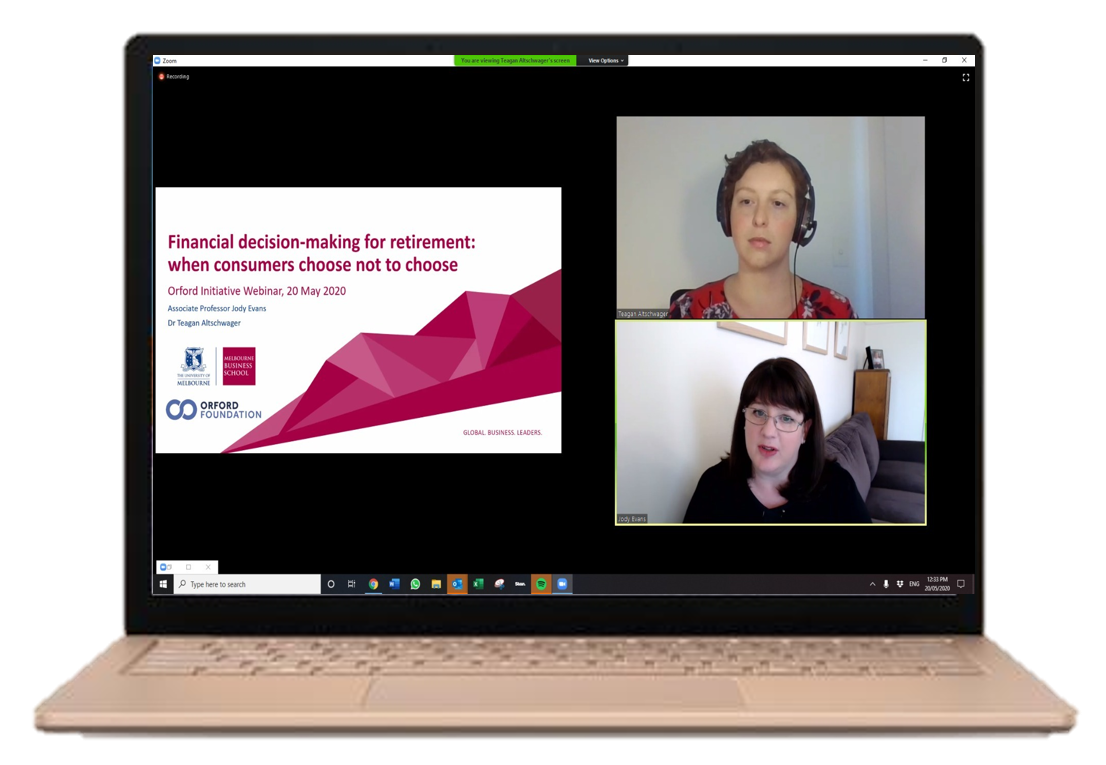 Over 100 people tuned in to the recent  Melbourne Business School Orford Initiative research webinar to see the findings from their two latest experiments into financial decision-making for retirement.

Dr Jody Evans and Dr Teagan Altschwager started by introducing themselves as marketing academics rather than actuaries or financial services experts and clarified their approach to financial decision making in retirement from the perspective of consumer psychology and behaviour.

The work to date highlights the importance of including perspectives from outside the bubble of superannuation or financial services to tackle the complex issue of helping Australians prepare for retirement.

Jody and Teagan discussed several findings that should have an impact on how superannuation funds and financial advisors help Australians prepare for retirement.

The first of these was that while retirees feel quite unprepared for retirement they also acknowledge that they don’t feel they’ve taken enough action in planning and preparing for their financial situation in retirement.

60% of respondents strongly or partially believe that their money will not last as long as they do.

This is a really interesting consumer behaviour issue – the fear of not having enough money and admitting that we are not prepared- is not driving us to action. Retirees feel paralysed and somewhat disengaged from financial decision making in retirement.

Superannuation funds should be asking themselves, and their members, how they can address this issue. Most funds tell us that engagement increases as members approach retirement, but this finding suggests that this engagement is not leading to a feeling of preparedness for retirement.

As well as having to deal with complex products, retirement decision making is veiled in uncertainty. Teagan listed some of the drivers of that uncertainty including:

Just as importantly, retirees know that they often don’t have the means to recover lost money or fix their financial mistakes. A wrong decision is likely to have irreversible impacts for the rest of their life.

So how can we help members to make decisions?

An approach recommended by the researchers is to present the information in a more digestible manner. They observed that when presented with many choices, that, on average, respondents allocated their funds across three options. This preference towards three may indicate that a choice involving more than three options is ‘too many’ for a consumer to meaningfully or comprehensively evaluate (cognitive overload), particularly for complex products.

Teagan suggested that by reducing key decisions to the best three or, if necessary, staggering decisions into various stages, information would be presented in a more digestible manner.

Given their backgrounds, the researchers were well aware that when conducting consumer research, one of the big flaws is assuming the extent to which people’s demonstrated preference can be used to predict their actual purchase behaviour. Experiment 1 showed that when faced with a simple retirement savings allocation task that, despite popular belief, people are willing to consider lifetime annuities. Almost 20% of the respondents said that they would be willing to allocate almost half of their funds to lifetime annuities.

“We wanted to know why people, many of whom were worried about their money running out in retirement, didn’t leap at the opportunity to have a product that guarantees an income for life.” Dr Teagan Altschwager

In Experiment 2, the researchers first asked the respondents which option they would choose. They then asked, given this option, would you actually buy it. Jody said that they were quite surprised by these findings and that they haven’t seen such a strong finding in any other product category when using this sort of choice experiment.

Only 18% of the participants said they would follow through with their choice. When they looked at the other dimensions there were some interesting results that have implications for superannuation funds.

Firstly, women and those with a lower sense of financial well-being are more likely to say they would not purchase an annuity. Secondly, the amount of retirement savings doesn’t appear to be a factor.

Demand for annuities but avoidance of complexity

The findings demonstrate two somewhat conflicting phenomena; there is a definite demand for lifetime annuities, however, when faced with specific annuity comparisons people refuse to make choices.

Jody wrapped up the presentation by urging superannuation funds and financial advisors to consider the complexity of their messaging and what strategies might help break complex decisions down into smaller, more digestible steps for the consumer.

Rather than dismissing the demand for lifetime income products, the industry needs to help consumers by simplifying product messaging (within regulatory boundaries) so that people do not decide to just walk away.

See here to view the recording of the event.

See here for the full report.