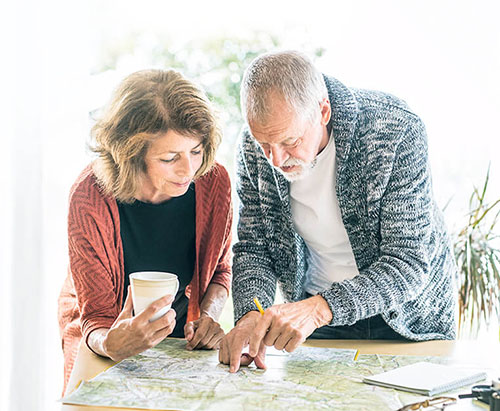 We have compiled a list of frequently asked questions regarding the use of the
Real Lifetime Pension and its capabilities.

The Real Lifetime Pension is offered in both deferred lifetime and immediate Pension form. We do not intend to offer fixed term pensions, which are in the nature of structured term deposits and are well served by conventional annuities.

Optimum is open to allowing a short cooling off period, but given our philosophy of offering a high performance pension, does not intend to offer a withdrawal period, as with some annuities in other countries, as this will reduce investment returns and increase complexity. Our view is that flexibility in ability to withdraw cash will derive from the portion of the person’s assets invested in their Account Based Pension. We consider the Real Lifetime Pension should be allowed to do what it does best; offer strong pension payments for life.

The Centrelink treatment for deferred pensions has been clarified. During the deferral stage, only 60% of the investment will count toward the assets test. This will reduce to 30% after age 84. Once payment commences, 60% of the pension income will count towards the income test.

Originally an ALP policy, the 2013 Liberal government announced that it would not go ahead with this proposed extension of concessional treatment to deferred lifetime annuities, but in 2016, the newly elected Liberal government reconsidered and extended it to self-annuitisation products as well. Source: SuperGuide – 25 January 2017

No, except in the cooling off period

There is no penalty. We will offer a deferred lifetime pension with death benefit in the deferred period. We do not intend to allow voluntary withdrawal in respect of the deferred pension other than in the cooling off period. The member can meet their cash needs from the Account Based Pension.

Zero. An Immediate Pension can be thought of as having a deferral period of zero.

We have modelled the Deferred pension to be offered in the pension phase and as such 0% tax would be payable.

We offer flexibility to make changes in investment options during the whole life of the Pension; i.e. both in the deferral period and the post deferral period.

The funds will be invested based on the member’s investment choice(s) after the deferral period – i.e. member driven – same as in the accumulation stage.

We have performed significant modelling and have developed models and calculators for planners and consumers to use. It is expected that customised versions of these would be rolled out as part of the implementation process.

The Real Lifetime Pension is a separate product to the Account Based Pension, but we expect both products will sit under a single member account. This will allow simplicity in reporting and also allow for the retiree to draw a fixed dollar pension
from the single member account, with Account Based Pension drawdowns being managed to achieve this. A pensioner might invest a percentage of his retirement benefit in:

With the percentages adding to 100%. The values of these products would
determine the amount of Age Pension payable.

The RLP meets the definition of Lifetime income Streams in the amended SIS Regulations.

The Fund would hold the FUM, which it can invest using its current investment management arrangements.

Hannover Re provides mortality reinsurance to the pool. Premiums will be paid by the pool to Hannover Re on a regular basis (accrued each time a unit price is determined but paid monthly, quarterly or annually after allowing for the actual mortality experience).

If the member wants to smooth their pension income, we consider that having the ABP work in sync with the Real Lifetime Pension will provide an attractive retirement solution, because the pensioner can set a required annual income (paid monthly or as frequently as they’d like) with the ABP drawdowns being varied to achieve this. However, the Real Lifetime Pension has no impact on the Minimum and Maximum limits for the ABP.

Optimum Pensions’ new Real Lifetime Pension may be delivered by Super
Funds to their members to address Australians’ longevity risk while providing
higher performance than current lifetime annuities in the market.