“Longevity protection” is a feature that can be added to your superannuation when you retire to ensure your income doesn’t run out if you live longer than your life expectancy. Unfortunately, adequate longevity protection for retirees has not been available on an efficient and effective basis in Australia.

A survey carried out by the Retirement Incomes Working Group (RIWG) of our Actuaries Institute of Australia, showed that many planners simply spread the amount available to provide a client’s future retirement income by the client(s) life expectation. There were many variations to determining the future period over which income was spread e.g. some planners added a number of years or discussed the divisor with their client.

Unfortunately, none of us die when forecast. Personally, I know that I haven’t died to date, therefore I don’t expect to die anytime soon.

Ages at death of parents may however provide a guide. My mother died at age 72 and my father at age 93. Allowing for improvements in healthcare (as you should) between our generations is an important part of the question, at what age will I die?

The trouble is that people die at random rather than to any timetable.

This graph below shows the distribution of the number of deaths expected in each future year from 1,000 males alive at age 65 years. Relatively few die at their life expectation of 87 years (only 44 of the initial 1,000).   Over 40% die between age 90 and 110. 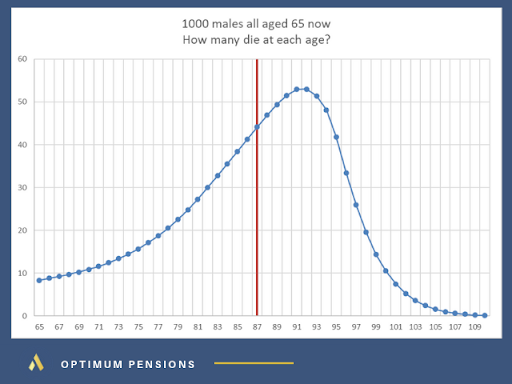 Thus, under current financial planning approaches people will either:- Die too early and leave money to (say) their cat. Or live too long and potentially run out of an adequate income – then potentially become a financial burden of their children, while living in a caravan in their married children’s back yard.

The new breed of lifetime income streams that the government is providing incentives for ought to avoid these risks by proving an income for life but not longer.

For clients who are concerned about being in poor health, they may qualify for an even higher income to compensate them for having a lower life expectation.

In addition, retirees ought to include their partner as a pensioner after their death – so an early death merely results in a change of income recipient. Partners may well need continuity of income instead of just a lump sum asset.

All of this seems highly socially desirable. Everyone can win including tax payers who are the ones who have to fund the safety net of the Age Pension for retirees who run out. Research has shown that those retirees receiving a regular income are far happier than those that don’t.