Break The Bias: Retire to the Max 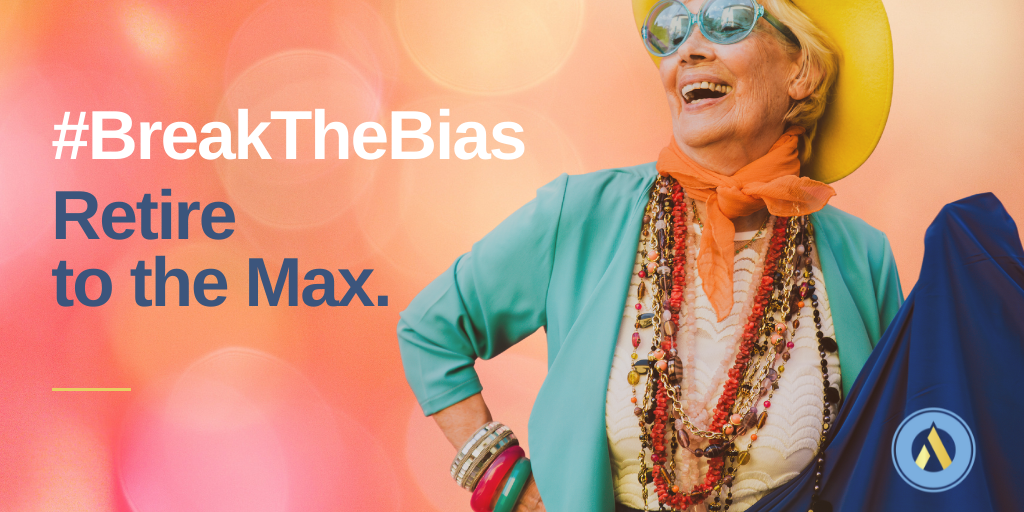 As a direct result, nearly half of Australian women are now relying on their partners’ savings as their primary source of retirement income and an ever-increasing number of women, particularly single women, are at greater risk of experiencing poverty in retirement.

International Womens Day 2022 calls on the global community to celebrate women’s achievements, raise awareness against bias and take action for equality. There is a large gap between the superannuation savings of Australian men and women that needs to be urgently addressed.

While the gender pay gap has narrowed slightly, men still earn, on average, significantly more than women, and the gender gap in superannuation savings is substantial. Women tend to reach the end of their working lives with a lower super balance, yet, with longer life expectancies, desperately need a higher super balance to see them through a comfortable retirement.

The current superannuation system overwhelmingly disadvantages women who are more likely to pause paid work due to life events. Maternity leave, divorce, single parenthood, and caring for ageing parents, disproportionately impact women’s financial security. An unfortunate result of sacrificing their own career path or choosing to support others, including their partner’s career.

The chart below clearly shows the gender gap in average superannuation balances for funds with more than four members. Males own 58% of these superannuation assets. SMSFs are a bit more balanced, with males owning 53% of SMSFs assets. 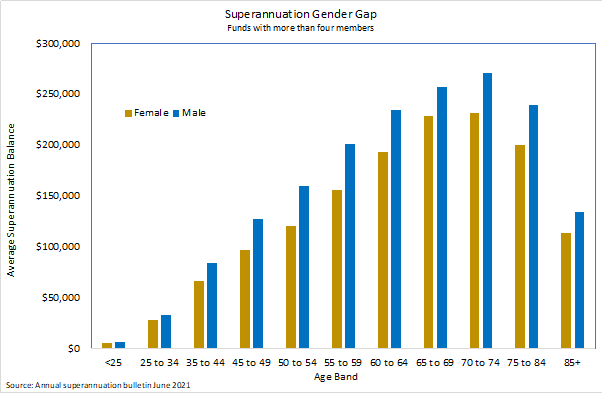 ‘A husband is not a retirement plan’

The aptly named ‘A husband is not a retirement plan’ 2016 senate inquiry explored economic security for women in retirement and identified 19 recommendations to improve the retirement savings of Australian women.

Nearly six years later, not much has changed, and, in many ways, the situation has worsened. Just last week, there was a report that tens of thousands of women were coerced by abusive partners into taking out superannuation early under the federal government’s pandemic relief scheme – another example of the retirement income system not working for women.

Whichever way we look at it, the financial picture often isn’t a rosy one for Australian women and their retirement savings. For most women approaching retirement, boosting compulsory super or any similar tweaks to legislation to bridge the gender imbalance will be too late. The recent Treasury Intergenerational Report concurred that with the current policy course, there would still be a gender super gap in more than four decades.

These are the facts:

What can change is what we do with the facts. What we can learn from the current status quo to secure our future status quo as women secure in retirement and break the super bias.

The most obvious step is to close the gender pay gap, however, there are other measures that can be taken to help break the super bias.

The Federal Government finally scrapping the $450 threshold that prevented low-income workers from participating in the compulsory superannuation system is a step forward. An initiative that will deliver a welcome boost to many women with part-time jobs who are not receiving superannuation contributions.

Another positive change in which women will be the main beneficiaries is recent legislation that will make it easier for a partner to obtain details of their ex-partner’s superannuation to allow it to be included in a divorce property settlement. Greater transparency over the details of a former partner’s super assets is the first step in making a difficult process easier and cheaper.

But the 2016 report also recommended that the superannuation guarantee be paid on the Commonwealth Paid Parental Leave Scheme. We are still waiting.

Every small move forward is a win, but breaking the super bias isn’t something women can afford to sit back and watch the politicians and industry bodies solve. There is just not enough time.

Retire to the Max.

An AustralianSuper Monash University study into retirement confidence found that women had a lower level of confidence than men. Report author Dr Fernanda Mata believes this is partly because of the gender super gap.

Women need to invest in themselves and their own future financial security. To be proactive, investigate and secure retirement solutions that will suit their needs and boost their confidence in retirement.

Retirement products that will help manage the uncertainty of longer life expectancy, changed living or health conditions, or fluctuating spending do exist and can provide higher levels of income than just drawing the minimum (safest) level from the typical retirement product currently offered by superannuation funds. The right lifetime income product can offer reliable payments, maximum peace of mind, and maximum enjoyment in retirement and are well suited ideal to support women to ‘retire to the max‘.

A lifetime pension will last as long as you live.

Today on International Women’s Day, one of the best things that you could gift yourself is a guaranteed income stream for life.