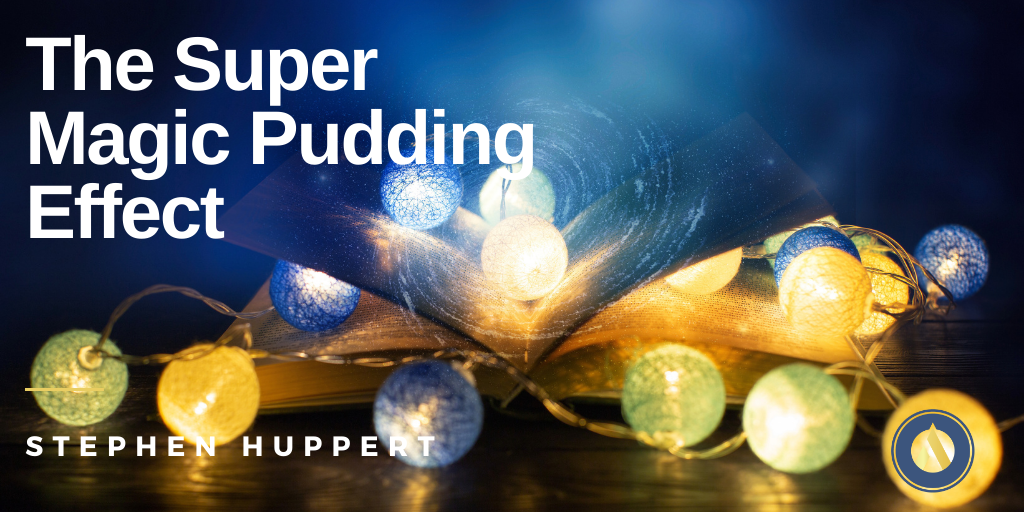 Millions of Australians are in the process of receiving their annual superannuation statements, and those with account-based pensions can be forgiven for likening their pension to the mystical and often-told children’s story of the Magic Pudding!

The well-loved 1918 Australian children’s book is the story of a magic talking pudding named Albert which, no matter how often he is eaten, always reforms in order to be eaten again. Just like pudding, these retirees will see more money in their accounts on 30 June 2021 than they had on 30 June 2020. How can this be, given they have been receiving drawdowns from their accounts during the year?

Two factors are at play here, and neither of them is magic!

Firstly, most superannuation funds have reported between 15% pa and 20% annual returns for the 2021 Financial Year.

Secondly, retirees with account-based pensions must withdraw a minimum amount each year (4% for those under 65 and increases with age) and whilst retirees can choose to withdraw more than the legislative minimum, it tends to act as a default.

Research by the CSIRO-Monash Superannuation Research Cluster released in 2016 found that most retirees with account-based pensions withdraw close to the minimum allowable amount from their superannuation each year. A 2018 paper from the UNSW Business School confirmed this behaviour trend.

So how do these findings ‘magically’ make pension payments grow? As part of the response to the coronavirus pandemic, the Federal Government reduced the superannuation minimum drawdown rates by 50 per cent for the 2020 and 2021 Financial Years, and early this year, announced they would extend this reduction to the 2022 Financial Year. Returns between 15% pa and 20% plus minimum drawdown rates of between 2% pa and 7% pa equals The Magic Pudding Effect!

Putting all your retirement savings into an account-based pension is not a great strategy for retirees with the possibility of 40-years of retirement. So, although it sounds great, this set of circumstances is unlikely to continue, and it is likely to blind retirees to the considerable risks associated with account-based pensions, including longevity risk and sequencing risk.

Optimum Pensions released a white paper asking Has Australia ‘Outlived’ the Account-Based Pension? and it is still as relevant as ever.

In light of the recent release of the Retirement Income Covenant Position Paper, it is worth seeing what the APRA statistics from the June 2021 Quarterly Superannuation Performance tell us about benefit payments.

While headlines focused on the value of total superannuation assets increased by nearly 15% in the financial year to pass the three trillion-dollar mark for the first time, there is plenty of other detail to explore.

Overall, it is a pleasing trend to see those committed to superannuation include more about retirement incomes, not just accumulating retirement balances. Chart 1 shows that the dollars paid as pension payments have been steadily increasing. The reversal of this trend in the last financial year might be related to the reduced minimum drawdown rate, but this was also reduced in the 2020 Financial Year.

However, the overwhelming proportion of the payments are not really pension payments but rather regular drawdowns from an account-based pension product. In a 2014 report, Mercer reported that 94% of retirement savings in Australia were allocated to account-based pensions. Given that this is still the only retirement product offered by almost every superannuation fund in Australia, there is no reason to think this percentage has changed. If anything, it might even be higher. 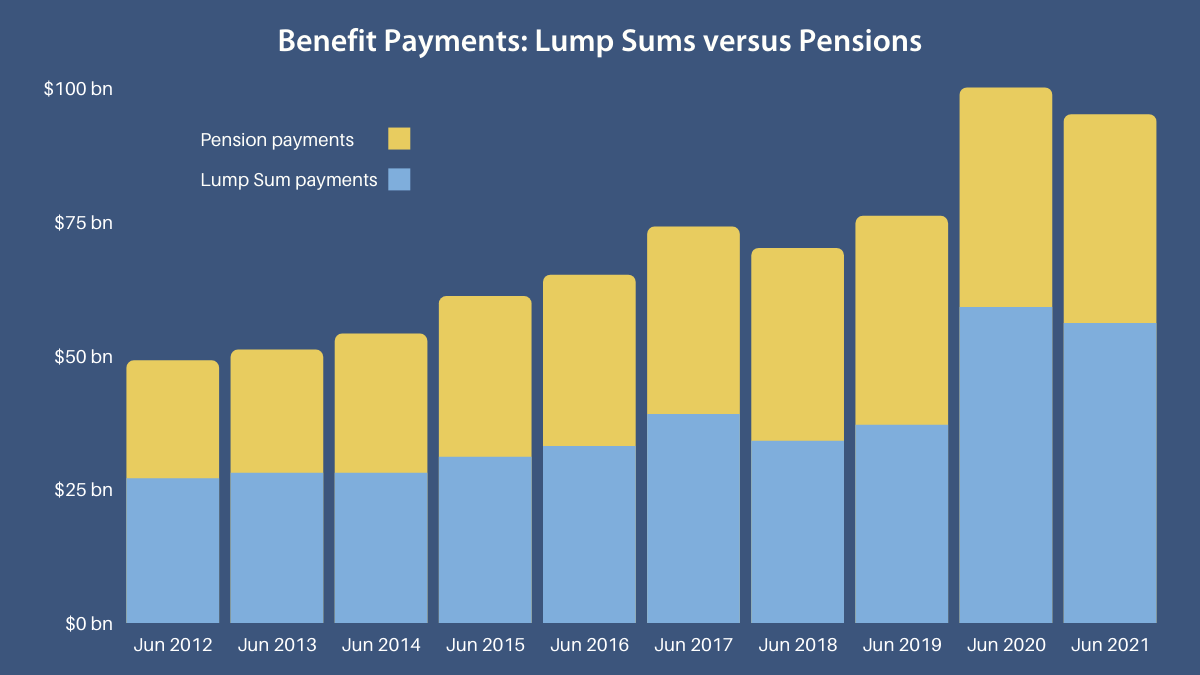 Pensions account for only about half of all superannuation benefits (see Chart 2). Lump sum benefit payments include retrenchment, redundancies, resignation and disability benefit payments, so not all are going to members at retirement. In normal circumstances, these will be predominantly paid to retirees but, as we will see, in recent times, that has not been the case. 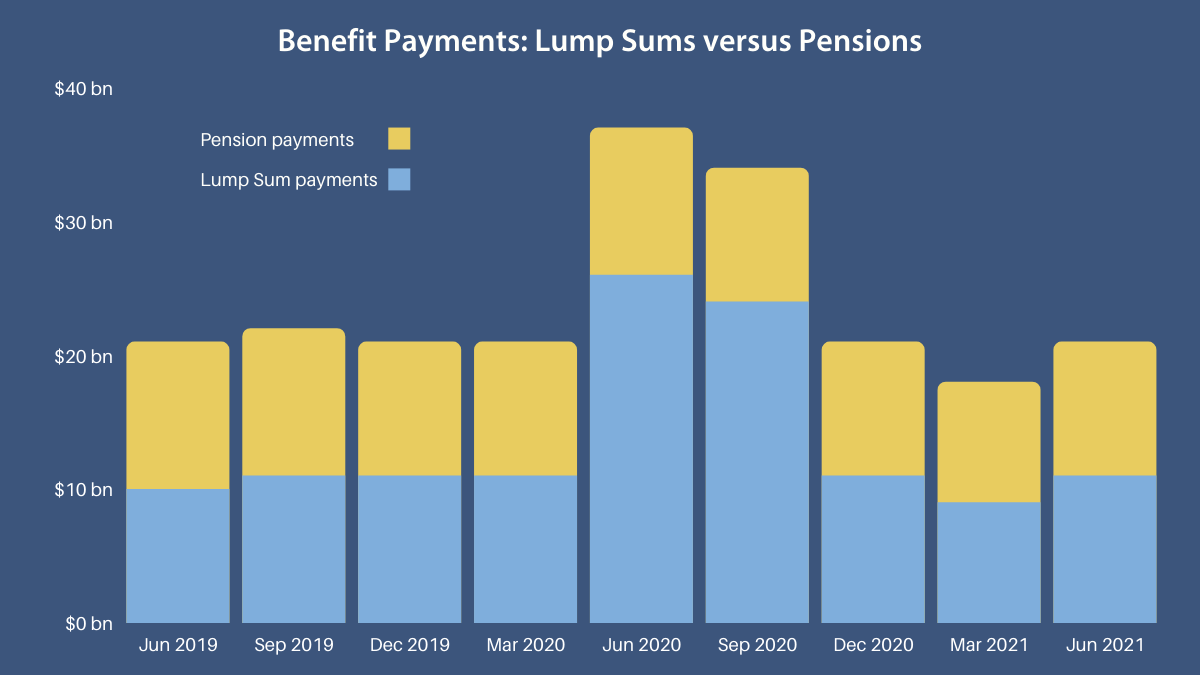 Prime face, this suggests more retirees are taking lump sum payments; however, it is clear from Chart 3 that this was due to significant lump sum payments in the June 2020 and September 2020 quarters as part of the Superannuation Early Release Scheme. Assuming that these quarters showed similar splits between lump sum and pensions as the March 2020 and December 2020 quarters, the June 2021 Financial Year ratio would have been around the 50:50 mark. 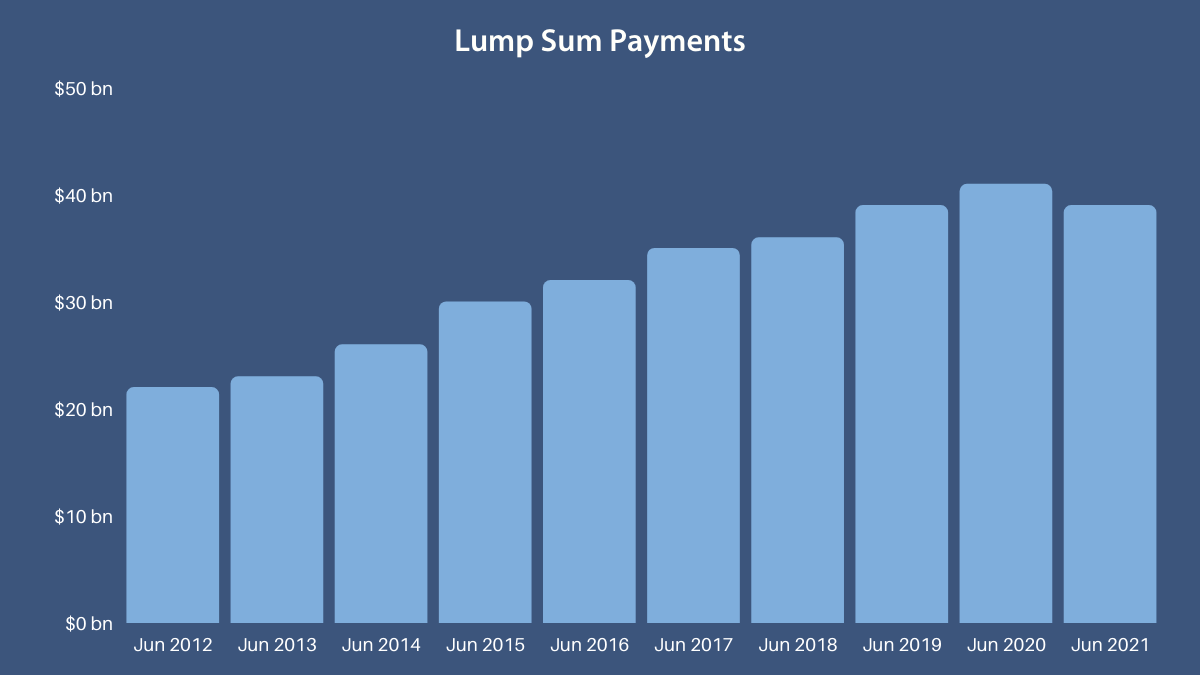 Acting in the member’s best interest

Reflecting on the APRA statistics, there are a few things superannuation funds should be doing to improve member retirement outcomes.

Firstly, educate retirees on ‘The Magic Pudding Effect’ and the risks associated with account-based pensions, including longevity risk and sequencing risk.

Secondly, as part of the retirement income covenant implementation, consider how you will help your members manage and mitigate these risks.

If your fund needs further information, reach out to the Optimum Pensions team.