What is an investment-linked annuity? 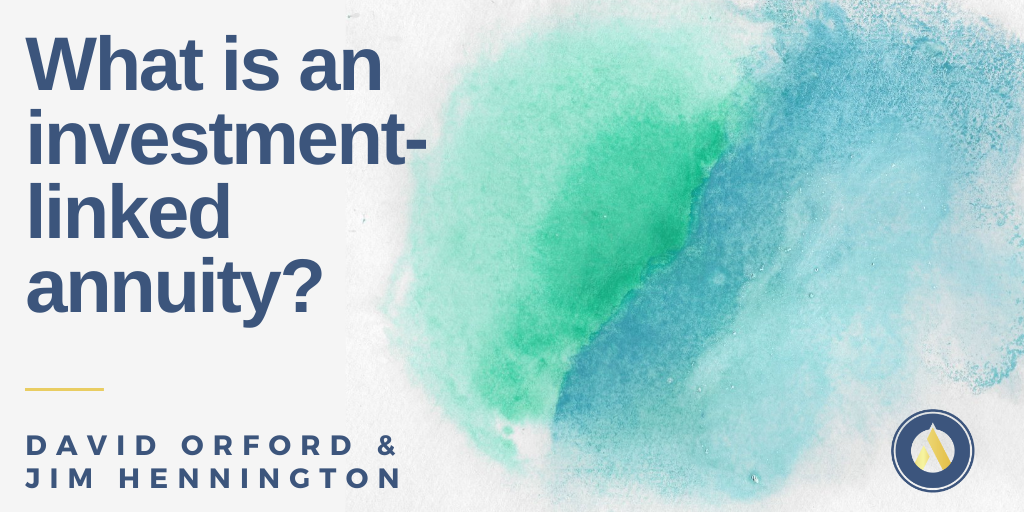 Investment-linked annuities are popular in the USA among retirees seeking an alternate income stream to traditional annuities. But what exactly are they? And why have they been developed in Australia?

An investment-linked lifetime annuity is an income stream where the retiree’s annual income moves up or down to reflect changes in the value of a selected investment option. A simple way to think about this is that it represents a new breed of retirement income product in Australia. They provide longevity protection to ensure the retiree never runs out of money but can also offer a choice of investments used to support that income. This design provides an opportunity to benefit from market growth over time. The longevity protection is provided by an insurer.

Why have these been developed?

In 2014, the Financial System Inquiry (FSI) concluded that account-based pensions (ABPs), used in isolation, cannot efficiently convert superannuation assets into retirement income. Modelling by the Australian Government Actuary (AGA) showed that retirement income can be 15-30% higher by combining retirement products, particularly by allocating some money to a lifetime income product.

indicates that Australian retirees have a ‘fear to consume’ as the majority of retirees only draw out the minimum they can each year, which often means a relatively large balance left unused on the last death of a couple – particularly for early deaths.

Retirees’ concerns over how long they could live are valid. Chart 1 shows the actual age at death for Australians aged 65 or more who died in 2016. It demonstrates how retirees simply can’t tell how long their retirement timeframe needs to be. Death could be regarded as random. Relatively few people die at their life expectation – as some financial planning approaches assume.

Chart 1: Actual age of death for all Australians who died during 2016 aged 65 or more 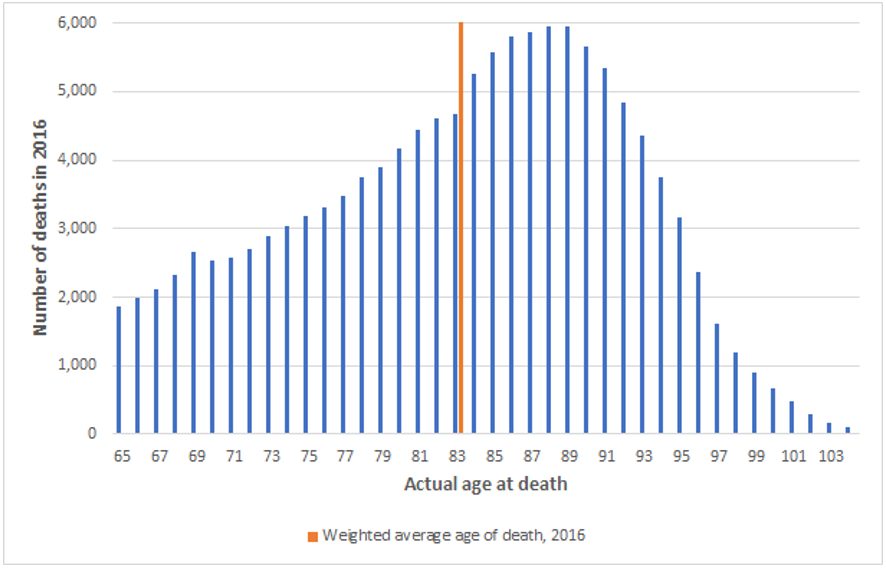 Other research indicates that age of parents’ death may not be a good indicator of the age of a retiree’s death – as causes of death may differ and medical treatments continue to improve.

Over 2,000 years ago the Romans solved this problem by using the annuity – one of the oldest financial products in the world. Annuities remove the risk of ‘money running out’ and mean you can be confident to spend your entire income each month (say) as you’re effectively receiving a salary, but not being required to work for it. 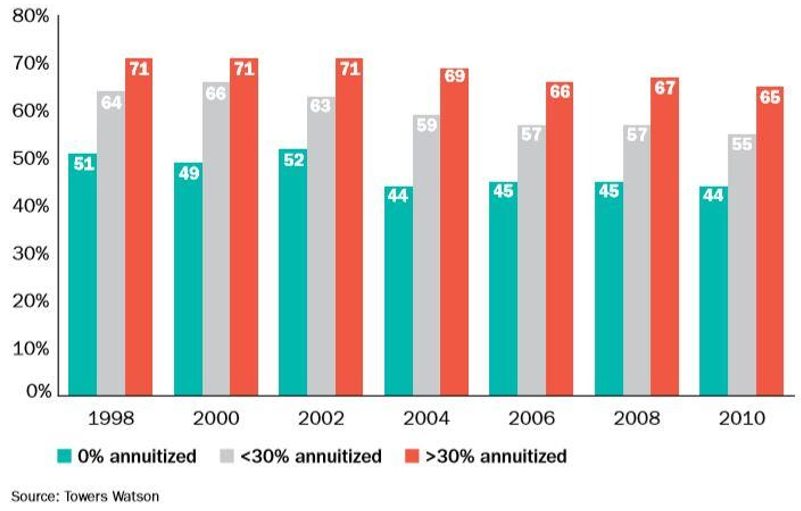 Many financial professionals baulk at the current cost of traditional annuities. In today’s low interest rate environment, lifetime annuities might be perceived as poor value for money. But part of the pricing of a traditional annuity is not just insuring longevity risk, but also in providing investment guarantees – often for 30 or more years into the future – and these are very expensive to provide – but desirable for risk-averse retirees.

What if lifetime annuities didn’t need to include investment guarantees? What if retirees with a balanced attitude to risk could benefit from longevity protection but still benefit from an exposure to growth assets – as they do with an ABP. For these retirees, the ideal retirement product could be an investment-linked annuity i.e. like an ABP with longevity protection, where the income target doesn’t decline in real terms in later years.

With an investment-linked annuity, each year’s income varies based on the performance of a selected investment option, rather than as a specific dollar amount of income.

Note: The following examples are highly simplified to demonstrate some basic concepts. They should not be relied on when making decisions about a specific financial product.

In this example, the initial level of payment specified by the investment-linked annuity gets set based on the retiree’s life expectancy at the time the annuity was purchased.

The investment-linked annuity provider guarantees the longevity risk (i.e. to ensure his payments continue for life – even if he lives to the end of the life tables) but not the investment risk (the price of units will vary in line with underlying investment performance).

George’s income will move up and down over time based on the investment fund unit price at the time of each payment. If over year 1 the unit price increased by 6% net of fees, then George’s retirement income will then be 6% higher, being $25,000 at the start of year 2.

Note that at inception, George’s income of $23,585 was slightly less than the minimum from an ABP (which is 5% x $500,000 = $25,000). However, the expected increases in his investment-linked annuity income over time equals the expected return of his investment fund. For a balanced fund, George assumes 6% per annum (net of fees). If his unit price goes up 6% per annum for 10 years, then his income would rise to $42,237 per annum.

George has an expectation that his investments will earn 6% per annum, but his actual target for his living standard is to keep pace with inflation. He doesn’t need an income that increases by 6% each year.

He wonders if it’s possible to modify the annuity so that his income increases more in line with CPI than with full market returns.

George asks the provider: “Would you be willing to increase my income if I agree to forgo 3% per annum of all future returns?”

The investment-linked annuity can be modified to smooth out the expected increases over the course of retirement. This is done by bringing forward some of the expected future investment returns and using this to allow a higher initial income when the annuity first commences.

A higher initial income can be paid to George. But instead of increasing in line with investment fund returns, his income will increase by the investment returns less 3% per annum.

The annuity provider converts his initial $500,000 into an income per annum. But instead of using his straight life expectancy for this calculation, they adjust the factor to 15.2. (which is actuarially equivalent to Example 1 but incorporating the 3% per annum adjustment).

By agreeing for his retirement income to increase by net returns less 3% p.a., George’s income in year one is $9,310 higher than in example 1.

If George’s investment fund does earn 6% per annum net of fees, then his retirement income will increase by 3% per annum (= 6% – 3%) which is more in line with potential inflation i.e. he can maintain his target lifestyle.

Chart 3: Projected income from each example (in today’s dollars) compared with an ABP 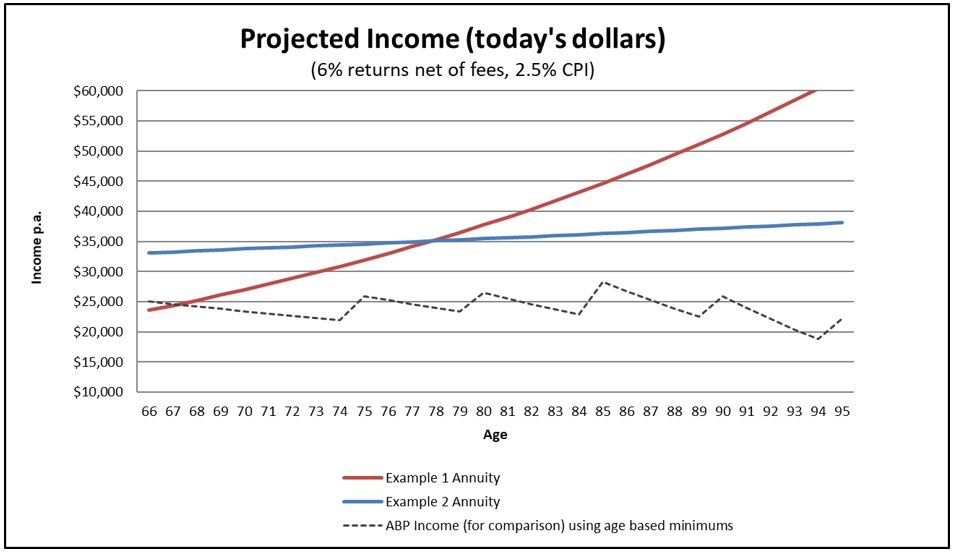 This article is an introduction only. Investment-linked lifetime annuities are being launched in Australia and soon will become part of the superannuation landscape. They provide an alternative to traditional lifetime annuities, which appear to some investors as poor value. They also provide an alternative to account-based pensions, which carry ‘fear to consume’ as per Chart 1.

A survey has shown this to be the greatest feared risk in retirement e.g. the fear of running out of savings in later life.

Valuable Centrelink means-test incentives are in place for lifetime income streams. These deliver an instant uplift in Age-Pension income for over 900,000 current retirees who are subject to means testing.

Footnote: The annuity rates in this article are simplified illustrations (to introduce basic concepts) using population mortality. The actual rate of income gets set by the provider and will be based on the anticipated mortality of the retirees who purchase that product and fees. In Europe, many annuities offer ‘individual underwriting’ which means that each applicant completes a short questionnaire to establish their health status. Those in sub-standard health may receive an increased annuity per annum.