Why you will live longer than you think 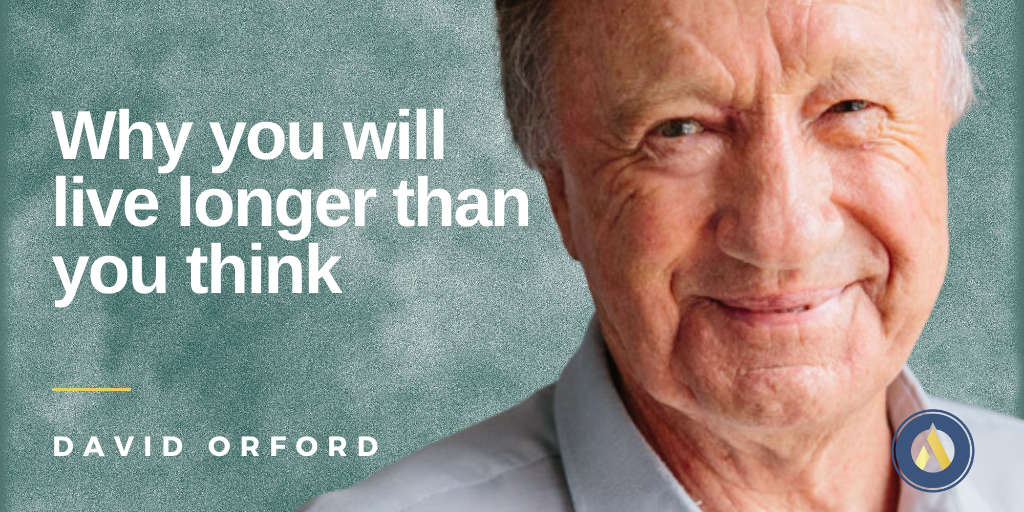 Getting life expectancy right and understanding how long we will live—and making sure we have enough retirement funds to last the distance—might be one of the most significant risks in retirement.

Good news! In our beautiful, sunburnt country, Australians are living longer than ever before. In the past 100 years, life expectancy has risen by approximately 20 years for both males and females due to medical advances and healthier lifestyles. [1]

The rate at which people die is known as the mortality rate, which mainly varies with age and sex. Other factors include health conditions and lifestyle.

Mortality rates have been declining due to medical advances and how we live our lives. The latter means we have some control over our own mortality rates. Lifestyle choices such as eating good quality food, staying at a reasonable weight, exercising regularly, acting quickly in response to any medical problems that arise may give us a better chance of living longer. That is, being subjected to lower mortality rates.

On the other hand, choices such as smoking, taking drugs, not being cautious crossing roads, and participating in dangerous activities may lead to a shorter lifespan relative to other people of our age, sex etc.

Thus we can have some control over our own longevity—that is, how long we’ll stay alive.

The ALTs can be misleading for retirement planning

These basic mortality rates can be misleading when used for retirement planning because the chance of you living longer than you think is pretty good. Mortality rates are expected to improve over time (that is, the rates reduce). As a population, we are living longer. [2]

The current ALTs are based on the 2016 Census and are called the ALT2015-17. The AGA also publishes an accompanying set of rates at which mortality rates are expected to reduce each year into the future for each age and sex.

The mortality rate he will experience at age 90 will be the current rate for age 90 but reduced by 25 years of improvements. That is, when our 65-year-old turns 90, improvements in life expectancy will mean he will expect to live longer than today’s 90-year-old males.

The red dotted line in Chart 1 shows the expected future mortality rates for a 65-year-old male, allowing for future improvements. You can see that he is likely to experience lower mortality rates than the ALT2015-17 (light blue vertical bars) and therefore expect to live longer. His life expectancy based on ALT2015-17 without improvements is 85—with the AGA’s improvement rates, [3] it is 87.

Chart 1:  Mortality rates for retirees are projected to reduce in the future [4] 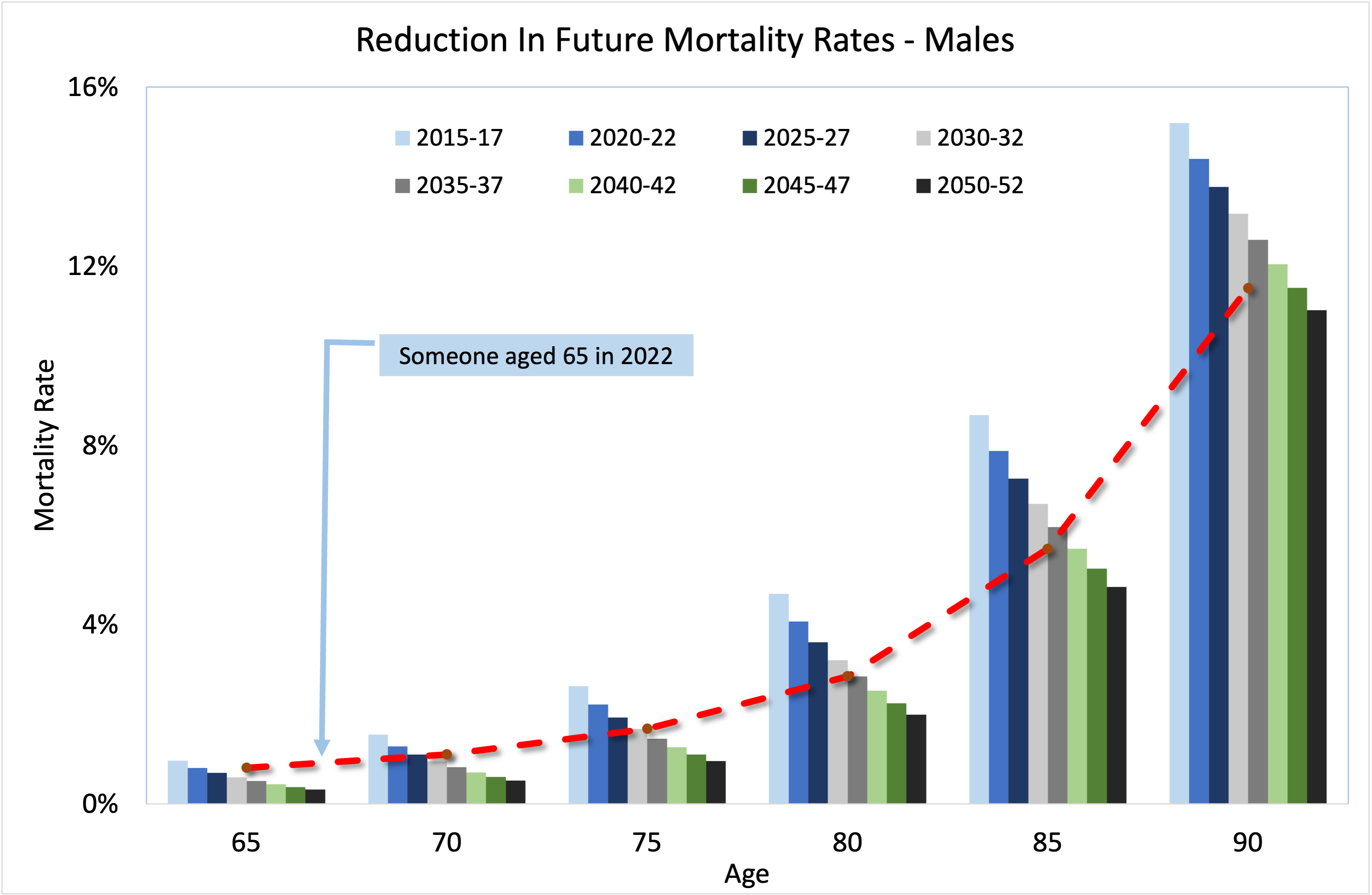 Suppose we were to use a life insurer’s assumptions. In that case, life expectation at age 65 might be 89 [5] for a male and 91 [5] for a female to reflect that the people who purchase lifetime annuities typically know or expect they’ll live a long time – and actually do.

If the chances of dying reduce, more of us will live to advanced ages. As a result, life expectancies correspondingly increase compared to current levels. Moreover, life expectancies have been increasing significantly in the past and are expected to continue to do so (see Chart 2).

Chart 2:  Life expectancy statistics for new retirees have been steadily increasing and are expected to continue to increase 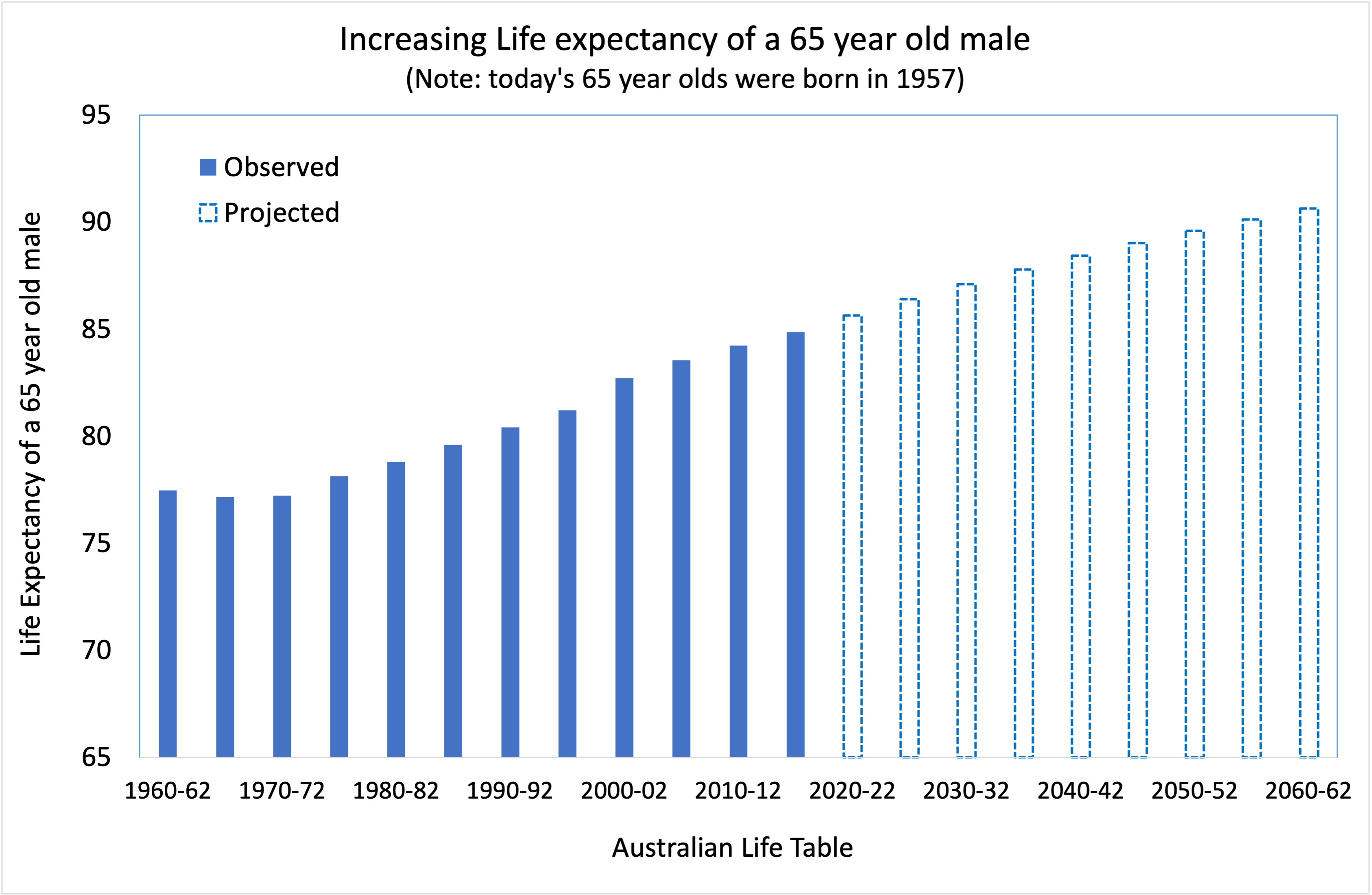 Life Expectation is only an average

it is important to remember that life expectation is only an average and an individual’s actual future lifetime will be quite different to these averages for several reasons, including:

How Long Will I Live?

Optimum Pensions has developed an online Lifespan Calculator to give you a more complete picture of your longevity. Alongside your life expectancy based on the ALTs, you can include additional significant factors to personalise your life expectancy and include expected future improvements in mortality rates. Comparing these results to the ALT2015-17 (unimproved) life expectations for your sex and current age proves that you’ll live longer than you think.

Life insurance companies that sell lifetime annuities (which provide a guaranteed income for life) might think that mortality rates may reduce even faster than this as they mainly deal with people who take better care of themselves and/or were born with healthy physical health attributes.

Of course, the improvements used are only assumptions. The rates may improve faster or slower or even worsen (the mortality rates increase). Moreover, no one knows whether improvements will occur precisely as projected as the rates of improvement can change over time. Many factors, including improvements in medical technology, reduction in smoking and safer cars, might cause further reductions than assumed. On the other hand, the unknown long-term effects of the current (and future?) pandemic, increases in drug overdoses, increasing obesity, global warming are just some of the factors that might cause mortality rates to reduce more slowly or even increase.

You’ll live longer than you think.

Manufacturers of lifetime annuity products need to make reasonable allowances for uncertainty – so that they always have the funds to keep paying the amounts of annuities payable  –even if mortality rates reduce faster than forecast by the Actuary setting the mortality rate assumptions.

The bottom line is, you’ll live longer than you think.

Consequently, as you are expected to live longer, you’ll either need to:

Another option is to allocate some retirement savings to a retirement income stream that guarantees to pay you an income for life. Such a product can provide between 15% to 30% more retirement income than an Account Based Pension. This is achieved by allocating more of your investment toward paying you an income at the expense of providing a death benefit after you retire (other than to protect your estate in the event of an early death).

Some people may regard lifetime annuities as too expensive, but once you consider improvements in mortality, they may not appear too expensive after all.